Beyond the Mother Tongue: Learning Yiddish in America 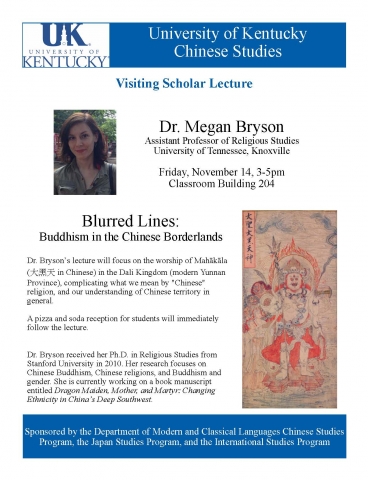 The Specter of Global China: Contesting the Power & Peril of Chinese State Capital in Zambia

Ching Kwan Lee graduated from the University of California-Berkeley Sociology Department, and is the author of the award winning Against the Law.  Her talk analyzes the peculiarity of outbound Chinese state capital by comparing it with global private capital in copper and construction in Zambia.  Refuting the dominant narratives of "Chinese colonialism" and "south-south cooperation," comparative ethnographic data collected over a 5-year period chronicle the multi-faceted struggles that confront and differentiate these two varieties of capital entailing uneven potentials for post-colonial African development.

There will also be a small workshop on doing ethnography in China at 10AM on the same day. (Please contact Thomas Janoski at tjanos@uky.edu for details)

By placing the Israeli experience in a comparative perspective, I explore the circumstances that led to the debut of present-day special operations forces and the mechanisms that allowed these units to overcome operational and organizational obstacles and ascend to their current prominent status.

The recent crossing of four different vectors, namely the rise of asymmetrical wars, technological leaps, heightened sensitivity to military casualties, and the professionalization of armed forces provided a highly conducive environment for the rise of Special Operations Forces (SOFs).

Small teams of professional operators, equipped with cutting edge technologies, can rapidly deploy and carry out missions of strategic significance that in the past required massive military campaigns.

An analysis of an original global database of SOFs provides support for the trend. Indeed, the last three decades were marked by a steady rise in the size and influence of these actors in the international arena.

However, a closer look into the data unveils that the seeming linear trend line is a façade, and that in reality, a small number of units account for the alleged global proliferation of this branch. The desire to solve this puzzle brought me to the field and so far I discovered a subsequent list of equally important issues.

While the role of social media has been feverishly debated in fomenting, planning, and sustaining revolutions since twitter was first hailed—somewhat exaggeratedly—as a revolutionary technology in Moldova in 2009 and YouTube became a people's archive for election protests in Tehran during the summer of that same year, it seems incontestable that broadcast media (often singular, uni-directional, and hierarchical) are being supplanted by decentralized, multi-directional "public utterances" from social media. The result is a significantly more adaptable, amorphous, global, but also ephemeral public sphere. However, even with the best intentions, social media can amplify misinformation on a global scale, creating an echo chamber of falsehoods that are easily accepted as truths by virtue of their sheer repetition.  And more ominously, social media can be tracked and used to squelch the very voices that use it.  In this talk, Todd Presner will discuss a series of projects that analyze the role of social media in the Middle East, starting with the 2009 Tehran election protests and going up to the 2011 "Arab Spring," including twitter projects such as the "Voices of January 25th" (Egypt), "Voices of February 17th" (Libya), and HyperCities as examples.

Todd Presner is Professor of Germanic Languages and Comparative Literature at the University of California Los Angeles.  He is the Chair of UCLA’s Digital Humanities Program and also the Sady and Ludwig Kahn Director of the UCLA Center for Jewish Studies. With Anne Burdick, Johanna Drucker, Peter Lunenfeld, and Jeffrey Schnapp, he is the co-author of Digital_Humanities (MIT Press, 2012). His most recent book is HyperCities: Thick Mapping in the Digital Humanities (Harvard University Press, 2014), with collaborators David Shepard and Yoh Kawano. Projects can be seen at this website: http://thebook.hypercities.com.

A reception will follow the program in the Alumni Gallery.

During WWII, Chaïm Perelman (1912-1984) helped found and lead the Comité de Défense des Juifs (Jewish Defense Committee), which saved the lives of 5,000 Belgian Jews. In 1947, Perelman founded the New Rhetoric Project as a response to the Holocaust and the failure of reason to prevent violence and war. In 1958, Perelman and his colleague Lucie Olbrechts-Tyteca published The New Rhetoric: A Treatise on Argumentation, which established the anchors of a new rhetoric, founded on informal logic and featuring the technique of dissociation. Professor Frank will place the New Rhetoric Project in its historical context, argue it is a Jewish rhetoric and the most important rhetoric of the 20th century, and that dissociation is a brilliant yet undeveloped notion.

A History of Judaism Through Comix

This event is free and open to the public.  JT Waldman is illustrator and author of Not the Israel My Parents Promised Me with harvey Pekar and Megillat Esther.