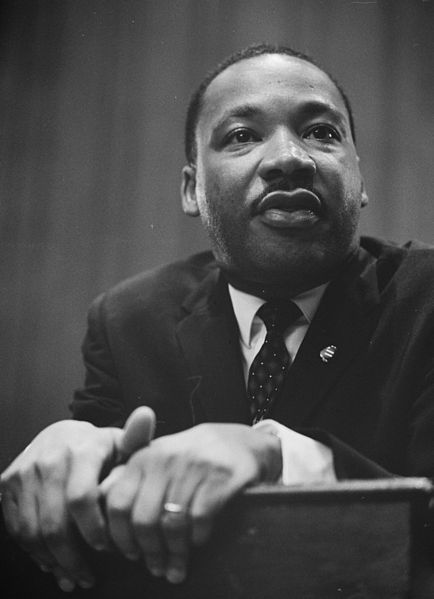 Luther King Jr.’s legacy this January.  Their brainstorming brought them around full circle to an old favorite — the campus vigil.

“The vigil stands as a way to remember Dr. King’s message and convey how important it is to keep his message alive,” said interim center director Kahlil Baker. “Dr. King strived to eradicate social injustice, violence and racism, and we want to celebrate that.”

For this year’s commemoration, on Jan. 19, the Sunday before Martin Luther King Jr. Day, the students, faculty and staff affiliated with the King Center have organized a vigil and march that will take participants on a journey through time. Along the path of the silent march, student-actors will present respectful recreations of some of the nation’s most infamous acts of violence, such as King’s assassination and Sept. 11.

“With the many acts of violence that have deeply impacted our country, it is important to increase awareness of these horrific events in support of stopping the violence. The reality is that social injustice, violence, and racism are still as real as they were in the 1960s. This will be a powerful, emotional journey,” Baker said.

Participants should gather on the patio outside the UK Student Center Annex by 5 p.m. Sunday to join the march.

Following the short march, a program of discussion and reflection on King’s legacy as it relates to our world today will be held in Room 230 of the Student Center . Leading this conversation will be Georgia Powers, Kentucky’s first African-American state senator, Kentucky’s first woman state senator and colleague of King; Gerald Smith, the MLK Center’s scholar in residence; and Carol Taylor, the Violence Intervention & Prevention Center’s social justice educator.